I live in a rural area where conventional broadband is just not worth paying for. When I moved in, a neighbour asked what I did for a living and winced, telling me that the BT speed was terrible and it takes up to five minutes to log-in to his banking and pay a single bill.

But there was an answer!

Alton Broadband is a community internet based group set up by a few people who needed better broadband in the village. They purchased the infrastructure and installed radio repeaters with a feed from a good connection in another village to provide a faster service than the ‘twisted pair’. With repeaters on larger houses, the church and the pub, locals can benefit from this service at an affordable cost. 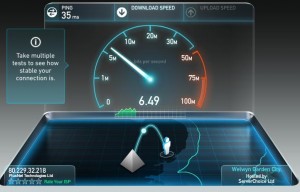 I live in a small hamlet coming off a unique feed separate to the main incoming signal. I was experiencing issues and losses, so the mangers asked me to do some periodic speed tests.

Using the Speed Checking Tool needed me to remember to do it and then email it to them – and I kept forgetting, for weeks on end!

I suggested using a Raspberry Pi to automate this and they liked it. With the excellent coding skills of Vincent Wilcox, a Raspberry Pi, SD card and power adapter we are giving Alton Broadband a Christmas present.

Vincent has made some code that carries out an automatic speed test every hour. The data is saved to a Raspberry Pi and then uploaded to an email address at 2am each morning. A few adjustments have been made and developments that I don’t understand, but Vincent assured me it would make the whole package stable, consistent and accountable.

I purchased a case on-line, Vincent kindly burnt the SD card with an operating system and added his code that runs when the Raspberry Pi starts up. A small buzzer was added to the GPIO pins so that a ‘success beep’ can be heard if the RaspberryPi boots up OK. There is no monitor needed, no keyboard or mouse in the USB, just the Ethernet cable for access to the router for the speed test. It’s intended that the Alton Broadband team can give anyone the box, plug it in to the power socket, plug in a patch cable from the Raspberry Pi to their router and leave it to start up and do the test every hour, on the hour.

Vincent has also burnt the code to my own Raspberry Pi and I will leave it running here at home, emailing Vincent, myself and the Alton Broadband team the results each night. The other one can be loaned to ‘customers’ experiencing difficulties to measure how their broadband is performing for as long as it’s plugged in. It won’t check the WiFi, just the internet coming down the feed from the Alton Broadband service and doesn’t need any attention or commands, input or management on-site.

Do you want the code?

In the true theme of Raspberry Pi and open source, Vincent has put all of his code on-line and he is working on a new and improved device. He has also expanded his code, to use a permanent ink screen to show results, maybe when talking to a customer service rep about your broadband speed and you can see it working here.

Here is the link to the code that Vincent has very kindly shared for you to use on your own Raspberry Pi to test your own internet connection https://github.com/vwillcox/speedtest-cron.

Are you interested in the Raspberry Pi and the kind of stuff that Vincent does? Why not come to our next event in Ipswich – http://www.ipswichraspberryjam.co.uk/

Thank you to Vincent for his time an efforts making this all possible.